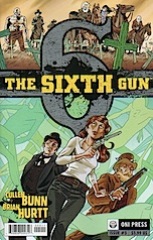 No real action this issue, not even during the last quarter, which means Bunn wasn’t establishing it as an regular formula the first few issues, it’s just how he played them.

Or maybe this issue, with General Hume raising a graveyard of zombies to attack our heroes, didn’t need the tension raised.

We get a lot of backstory this issue, including some backstory on new characters. Bunn introduces a new character–a black insurgent (I can never figure good terms for these things) who fought the Confederacy. I hate to be obvious, but it’s like Lando Calrissian shows up or something. And we get backstory on him. More than we’ve gotten on Drake–we’re hearing a lot more about him being a somewhat evil man, but it’s not a clear definition.