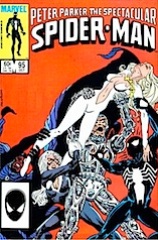 I guess this issue is better than the last one. Milgrom’s directly continuing it, which will probably wreck havoc in the monthly Spider-Man continuity over in Amazing, and he keeps his recap of the previous issue brief.

The writing is still bad–in the case of Cloak and Dagger and the Black Cat, very, very bad–and the art is still exceptionally weak, but at least it all passes somewhat painlessly. There’s nothing idiotic this time, just a bunch of bad dialogue and plotting. The pacing isn’t terrible–the issue takes a while to read because Milgrom has maybe nine different characters who get thought balloons. Lots of villains appear. It’s lame, but it’s not breezy.

Suffering through these issues, I wonder how anyone made it through this period of Spectacular. Black Cat alone would have made me quit reading the comic.