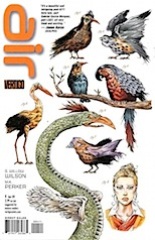 First, the ending–there’s this hostage situation with the protagonist, Blythe. She gets taken up to the roof where the villain throws her off and she lands safely on some steampunk thing.

Steampunk thing not the issue–we don’t get to see her taken up to the roof. There’s not enough time, because Wilson has spent the issue on other stuff. This issue’s present action is appropriate for two issues, instead she does it in one. It would have been two lovely issues too, with lots of character and texture. Instead, it’s awkward.

Second issue. Blythe’s boss. Wilson has clearly come up with a very interesting character, but doesn’t seem to get, as the readers are reading a comic book, they only get to see the woman and hear what she says…

Unless the writer does something special, which Wilson doesn’t.