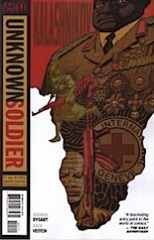 This issue, which Dysart tells from an omniscient first person point of view of an AK-47, might be the perfect example of the comic book medium’s narrative potential. I cannot think of any other medium where such a story could be told.

Without the visuals, it would not work, so prose is out. As a narrated film, it would not work because there’s the problem with the narrator. In writing, the reader can give the piece some leeway, but I cannot think of a single film narrated by an inanimate object.

What Dysart does is tell a focused history lesson. Where this particular weapon came from and where it goes. Dysart’s able to tell jokes, to show horrific events, to give a history lesson, all in twenty-two pages, all without leaving the context of a commercial comic book.