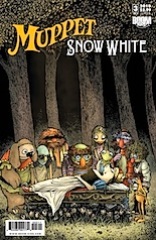 Remember when I said Snider and Storck were going to run into major pacing issues? They spend half this issue (or thereabouts) on a rock concert for the Electric Mayhem (who are the dwarves in Muppet Snow White) being threatened by one of the Queen’s assassins. Maybe both of them, I couldn’t keep track because there are all these forced attempts to break the fourth wall.

These Muppet adaptations of classic (read: public domain) works require thoughtful plotting finesse. Snow White clearly doesn’t have the material without some padding, but Snider and Storck wait until the end of this issue to make that padding both Muppet and content-related….

Piggy, the evil queen, decides she gets Kermit, the prince, and kidnaps him. This comes following a scene with her fighting with the Snow White stand in over whether she gets to eat the poison apple.

These are moves long overdue.