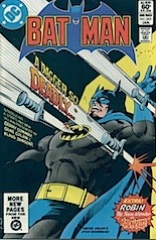 Yuck. Conway’s Detective is so good and his Batman is so bad. And he’s even got Gene Colan and Klaus Janson on the art here. With Janson’s inks, Colan doesn’t exactly look like himself. Everything’s a lot sharper, a lot more defined. It’s a good looking issue, but I don’t know if there’s a single panel I’d point out as Colan. On the other hand, I’d have easily been able to guess Janson worked on it.

The story’s atrocious–Batman versus some moronic new villain. The bad part isn’t even the plot, it’s Conway’s writing of the character. He’s got Batman talking to himself for a few pages, explaining everything for the reader… but not discovering some clue, it’s Batman describing swinging from a rope.

On the other hand, the Robin backup is well-executed. None of Conway’s problems in the feature show up in the backup. Maybe he’s overextended.