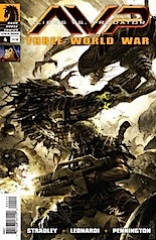 The romance between the protagonist and the nerdy guy doesn’t work. He’s not really a nerdy guy, of course, because he used to be in the Marines. Or something. But he’s basically the nerdy guy. He’s even got a nerdy name–I think Die Hard ruined the name Ellis for anyone serious.

But part of the comic needs the romance to be touching and significant and it’s not. Maybe Stradley doesn’t buy it either. He writes zero chemistry between them. They seem like siblings.

Even the art doesn’t annoy too much.