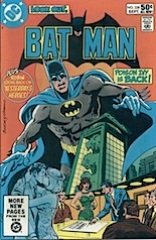 It’s a strange issue in a couple ways. Primarily because the Robin backup is some kind of life-affirming emotional origin of the character. It’s well-produced–Conway and Novick really make the reader pay attention to all the time shifts–and it’s trite and well-meaning. In other words, solid eighties mainstream work.

Unfortunately, Novick’s art is better on the backup than it is on the Batman feature.

The feature’s got some awesome stuff–the idea of a hypnotized Batman walking through Gotham nightlife is just fantastic. That scene alone not totally flopping makes the issue. But then Conway gives it an unresolved cliffhanger and comes up with one for both Bruce and Batman–Poison Ivy takes over the Wayne Foundation.

Some of the writing is somewhat loose, but Conway’s got a nice mix of Batman and Bruce Wayne here. And Novick’s not bad, just better on the backup.