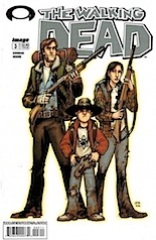 I think it might be me. I think I might not be suited for Walking Dead. I mean, it’s all very competently done and it’s sort of interesting if wholly unoriginal (the best friend really after Rick’s wife was no surprise, Moore’s art gave the character that body language from his first panel)–I just don’t care.

Kirkman’s characters are really, really boring. It’s like he goes out of his way to make them unoriginal–except maybe the little guy who warns Rick about his best friend, that character is interesting… since the evil friend is probably going to end up killing him.

I also don’t like the kids. They’re really annoying.

I’m sticking it through for a few more, to see if it picks up. Hopefully Kirkman will start killing off supporting cast members so I can remember their names. Also, some zombie attacks might liven the book up a bit.