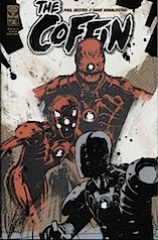 Dying and being resurrected as a plastic superman has been the best thing for him.

But this issue, when Hester’s got to write his dialogue, his narration, as this new good person… he can’t do it convincingly. Instead, he writes all of Ahmad’s lines in short sentences, his narration describing events more than emotions. He’s so detached from the character, Hester gives the epilogue to the villain, avoiding a sincere emotional moment.

Those complaints made, the Coffin ends well. The last issue is the most action oriented of the series and Huddleston illustrates those scenes well. He has to keep the nightmarish elements intact, action or not, and does. With a different artist, the Coffin might have just looked like Iron Man.

Hester’s emphasis on metaphysical hooey seems to have hampered the series, but not significantly.