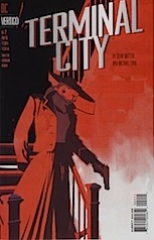 The second issue has a little less story than the first. It’s not quite a talking heads book because it’s before talking head books, but it’s basically everyone–except the girl and the human fly (I’m hoping names will start sticking next issue)–hanging around the hotel restaurant.

Yes, a lot of new stuff is introduced–though an unobservant reader would probably miss the mayor being in cahoots with a crime boss–but it’s all very mellow.

Until the big action sequence anyway and it, quite nicely, raises more questions than it answers. If I remember the conclusion to Terminal City correctly, a lot does go unanswered, which means one has to look at what raising the questions do for Motter’s story.

Here, for example, the questions raised by the girl’s mysterious summons gives Motter the chance to establish her character in action, not exposition.

Again, I love this comic.