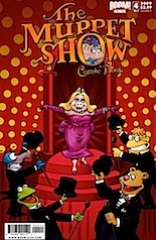 Langridge returns to form, storytelling-wise, for his Miss Piggy issue. She’s not the issue’s protagonist, but she’s not the subject either; instead, Langridge treats it as a jumble.

The show needs a guest and can’t afford anyone (it’s rather unfortunate Langridge doesn’t get to use real celebrities, since it always made the actual show so funny… maybe he should use other Boom! characters, which would at least be format adaptive–or other Boom! creators). They get a psychic who sends Piggy into a tizzy and hilarity ensues.

He also relies a lot less on sketches than he did in any of the previous issues, maybe because Piggy is so much more amusing. His non-Muppet standard sketches are always nice little asides, here one with a bunch of talking houses is incredibly charming.