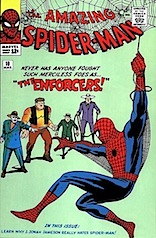 So I’m not imagining things–Lee was getting sick of the high school constraints. He sends Aunt May (all better after her operation, though she does need a blood transfusion, which apparently weakens Spider-Man, but it’s hard to gauge his abilities since… well, Lee always fluctuates them anyway to add drama to a fight) off the Florida and gives Peter a place to pace.

As bad guys go, the Enforcers are kind of boring, with the Big Man being an interesting idea for a villain, but not particularly thought through (how did Foswell become the Big Man?). But there’s lots of action and romantic drama from Peter and Betty (Lee wrote romance comics, after all).

Besides the developments with Betty, Lee’s got Flash Thompson softening up a lot this issue–so’s Liz Allen. She’s usually egging Flash to bully Peter, but here she’s sympathetic.

It’s good, but not outstanding.