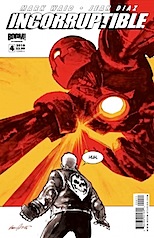 Someone does look at this book, right? Before it’s printed, I mean. Jean Diaz’s artwork is so not ready for prime time… I say it every issue I imagine. He’s just so static, so bad. And with an all action issue, it’s especially horrendous.

This issue’s a little better because most of it is a (poorly drawn) fight scene and boring, poorly drawn fight scenes are a lot better than the Christian indoctrination Waid usually does with the comic. There’s only the briefest spouting of rhetoric from Max Damage at the beginning of the issue–he’s at his secret base, a suburban house.

There are more Plutonian appearances in this one–in flashback–than usual and it reminds of a better book, so it’s somewhat digestible.

As opposed to Irredeemable, which seemingly will go stale the longer the run, Incorruptible might actually get an average bad after another dozen issues.