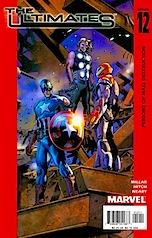 And Millar brings it around… relatively. It’s a big huge fight scene with the fate of the solar system in the balance so maybe he gets some easy melodramatic points (he sure doesn’t score anything with the Captain America versus Nazi Skrull punch-out, not until the whole “A for America” thing, which doesn’t really sit well figuring Captain America’s from the 1940s and not a Neo-Con, but whatever… no one ever said Millar thought before he wrote).

The best moments of the comic–when the soldiers mock Iron Man’s sacrifice, for example–are sometimes quiet, sometimes loud. Thor, again, has the best lines in the comic. Millar never doing an Ultimate Thor series is his undoing, creatively speaking. For whatever reason, he writes him leagues better than anyone else.

I’m having some trouble with Captain America as a brilliant strategist too… shouldn’t have he won WWII earlier then?