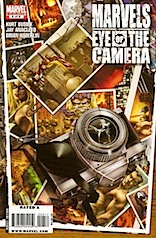 Okay, so Busiek doesn’t pull it off, not saving the whole series, not even saving the whole issue, but when he has the chance to be a right cheap bastard and have the mutant girl be a hallucination of a dying cancer patient… he doesn’t do it. He doesn’t do the M. Night Shyamalan ending. He does the work instead.

The ending doesn’t work–we never find out the title of the new book the protagonist was working on and there’s this whole emphasis on his concern for mutant rights–which started an issue ago, certainly not through the whole series–but most of the issue does.

Marvels: Eye of the Camera is a piece of shit. The only issue worth a cent, much less three hundred and ninety-nine of them, is this last one. It could have been a one shot. Would have been better as one too.