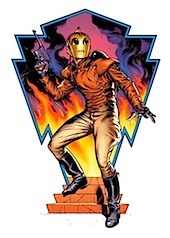 Cliff’s New York Adventure doesn’t feature any New York landmarks. No Rocketeer at the Empire State Building or Statue of Liberty. There’s a neat guest appearance by the Shadow (Stevens does a great job of dodging copyright infringement). It’s got a lot going on–there’s the resolution of the first story’s cliffhanger as Cliff confronts Betty on her way to Europe (she doesn’t have a very big role this time, though Stevens does have some wonderful panels with her).

Stevens’s writing is … well, he has the same annoying dialect in parts but not overall. Unfortunately, he kind of misses the boat on what he’s actually writing here.

See, it’s all about the past coming back and he doesn’t realize he’s created a heartbreaking story. He wouldn’t have had to change the plot (which is action-packed), but there’s such a clear lack of realization, it feels like the story just can’t fully work. The end, which doesn’t even feature the protagonist, attests this problem.

Stevens unintentionally reveals Cliff as shallow and callous. There’s plenty of opportunity to redeem him, but since Stevens apparently didn’t realize what he’d done, he doesn’t do it.

I loathe these stories, where something clearly unintended hangs me up and clouds the entire work for me. It’s difficult because there’s a lot to like about it (though it’s nowhere near as strong as the first Rocketeer adventure, the supporting cast is just too weak).

Maybe if Stevens didn’t draw so well, I wouldn’t be so effected.