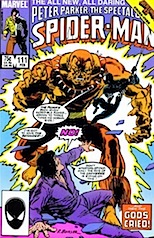 As far as lame battles go, I think Puma vs. Beyonder–actually continuing it–is about as lame as you can get.

The art might add significantly to the pain–I know it made me hurry through the comic so I could stop looking at it. Buckler’s inks are by the bullpen and it hurts. Though his pencils aren’t wowing to begin with.

So a c-list character duking it out with the lead of an enormous crossover event?