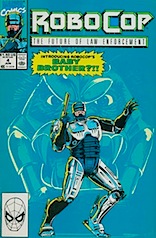 Grant runs a subplot throughout this entire issue–riots caused by poisoned soda pop–just to fill in time and to give a sense of time progressing. It’s a technique way too nice for a Robocop comic, especially one featuring a fight between Robocop, a cyborg gorilla (what did I just read with a cyborg gorilla–B.P.R.D.: 1946) and a cybernetically enhanced fight promoter. Yes, I really did say cybernetically enhanced fight promoter (Grant gives him noirish narration, but whatever).

Again, the weak point of the comic is Grant’s Robocop characterization. He’s unstoppable in mind, just not unstoppable in body, so at least there’s some chance of danger for him, but the infinite mental resolve is… well, I can’t decide if it’s annoying or lame.

Grant’s making him too perfect, without the slightest tinge of regret over being stuck in his cyborg body.