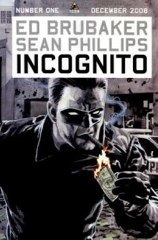 Am I supposed to think Tom Strong when I read the term science-villains? Brubaker’s take on a “realistic” superhuman villain is nice–well, he does have to do the whole history of this universe thing, which gets tiresome since every new superhero book has to get it established–because it’s not a metaphor for anything. His protagonist in Incognito isn’t a Superman stand-in or a Batman stand-in (or whatever the villainous equivalents would be), it’s just some guy and Brubaker’s telling a story about him.

There’s not a lot of superpowers on display here, instead Brubaker concentrates on a first act. Phillips, of course, does beautiful work, and his static action shots do well. But he captures the mediocrity of “normal” life so well, it’s like too much action would ruin it.

It occurs to me–Incognito is like a well-written Wanted. Intelligent instead of idiotic.