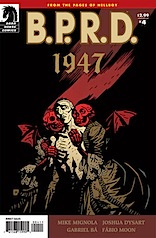 It’s almost over. I’m going to make it! (I never thought I’d be making that comment about something Dysart wrote).

This issue has less to recommend it than the previous one and it moves even faster. The pacing is accelerating. There’s even a lot of little Hellboy in this one and, while he’s cute and all, it’s not the comic book I bought.

Not having the Professor be the protagonist–not really having a protagonist–is doing this series in. I can’t remember the story of the sort of protagonist now, just because the guy who’s been kidnapped by vampires has such a better backstory.

Speaking of vampires, in the B.P.R.D. universe, do they or do they not appear human? I mean, when they aren’t making people hallucinate. It’s complicated and seems to go back and forth.

One issue left. Almost want to skip it, imagine it redeems the series.