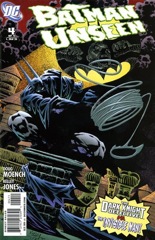 Moench’s all-too human Batman runs into more problems this issue, which is an all action Kelley Jones issue and needs to be seen to be believed. Moench’s invisible man character is so totally unhinged, so totally insane (I forgot to mention the issue before, when he decapitates an ex-girlfriend–DC doesn’t do age warnings?), he doesn’t really fit as a Batman villain. He’s way too dangerous. The Black Mask (didn’t he feed a woman some of her husband or something in Catwoman) comes across as less dangerous.

This approach to the villain could, potentially, offer for some good material, but Batman’s seemingly unaware of this particular criminal’s viciousness, at least as compared to Batman’s regular villains.

It’s a decent issue–some great art–but Unseen is definitely never going to rise above being a time-passer. Just like most of the Legends of the Dark Knight stories.