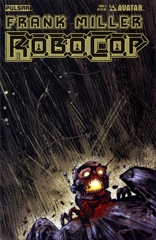 I can’t even tell anymore. Is this issue better than the last or is it the same or is it worse? I mean, there’s a lot of television stuff, a lot of stupid future post-nuclear war stuff–and a big fight scene between Robocop and Robocop 2 I couldn’t follow (Ryp is not given to comprehendible action scenes, something Grant should have thought about)–and it’s over in a few minutes.

Nothing like a four dollar comic you could read three times waiting for a McDonald’s coffee.

I know I’ve read Frank Miller’s Robocop before, so I wonder if, at this point then, I had given up as I have now. I’ll be finishing the comic, I’m a passive participant. I don’t think my brain has shut off completely. The benefit of having seen both Robocop films based on this source material means the occasionally jolting memory.