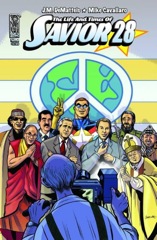 It does seem a little like the comic everyone wants to write is the one where Superman goes batshit crazy and flips out. Mark Waid’s doing it now, DC kind of did it with Superboy, I can’t think of a Marvel example, but maybe the Sentry did it during “Civil War,” but doesn’t anyone remember Superman III? Savior 28 is really flashy, but it’s more “revisionist” than a Frank Miller book. It’s a depressingly stark look at superheroes; it’s a tad much.

While it’s a good book and I can’t wait to see what DeMatteis does in the final two issues, all this “grown-up” handling of superheroes sucks the wonderment out of the genre. Psychoanalyzing their hangups, et cetera, et cetera, it’s a whole new genre on its own.

But who wants only depressing, stark superhero books? Aren’t they still escapist entertainment?

(Sorry for not talking about this issue).