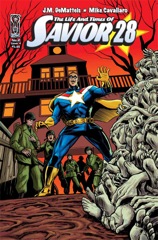 Yeah, no, DeMatteis isn’t backing down. He’s got Dick Cheney killing Captain America here or Superman (or, what is it, Super-Soldier). It’s stunning, especially given how DeMatteis has got his ultra-liberal heroine (who’s been off panel so far, at least in a speaking role) and his narrator slash murderer slash Cheney flunky commenting on her not giving anyone slightly conservative any consideration (do they really deserve any?).

Obviously, by making the neo-cons the supervillains, DeMatteis is assuring no bigger publisher is going to pick this one up (I can’t believe IDW did, do they think they’re the new Avatar or something?) and, well, it’s a crazy mix. I mean, he’s got Savior 28 breaking up Secret Wars to tell everyone involved they need to stop being so full of shit.