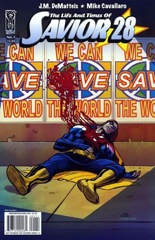 Usually 9/11 shows up as a gut shot in comics–Ex Machina, Morales’s awesome Captain America run, Conway’s recent Animal Man–but DeMatteis brings it out here front and center. I have no idea where he’s going with it but it certainly seems a heck of a lot more thoughtful than some guy throwing a soda can at Spider-Man or whatever Marvel did.

Savior 28 is a strange book–Cavallaro’s style, particularly when he’s doing the drunken, downtrodden hero, is an odd fit. Cavallaro, broadly, reminds of Kirby or Infantino, which makes Savior 28 a Silver Age visualization of a very modern story.

It’s also got no laughs in it.

DeMatteis is good at laughs (he’s also good at other stuff, but laughs were his “strong suit”) and it’s a real departure from what I was expecting.