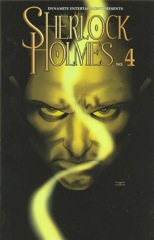 This issue’s lettering has a particular understanding of punctuation. It’s rather annoying, while also being incorrect.

Worse, in a terribly paced series overall, this issue serves no purpose but to promise us the final issue–but I find it unlikely it’ll deliver the promised “Trial of Sherlock Holmes.” Instead, I’m guessing it’ll be some speedy and cute resolution.

And even though Holmes appears in more panels this issue, I think, than any other so far, he’s still a subplot in his own book. Moore and Reppion seem far more interested in their undoubtedly clever mystery than characters, but they’re also not playing fair with the mystery.

From the start, the reader hasn’t been given all the information. I’m not suggesting the reader has to be able to solve it–Conan Doyle didn’t follow that practice–but when you show Watson reading instructions and don’t reveal them?