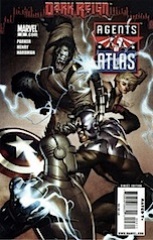 Frank Cho likes women with big bottoms, Clayton Henry likes women with big foreheads. To each his own. I thought Henry was one of those CG artists, but maybe not (didn’t he do that Venom/Carnage limited, the awful one by Milligan?). Anyway, I hate saying it, but I really missed Pagulayan’s grandeur this time around.

Thankfully, Gabriel Hardman is still doing the flashback art and the flashback is the primary story this issue. The split is basically the same–the flashback has this intriguing compelling story, the present day one does some “Dark Reign” lip service but also does some real character moments (this time between Namora and Venus).

There’s some momentum on the “Dark Reign” tie-in building, along with the title tying into the bigger Marvel Universe (is a Bucky Captain America cameo the Marvel equivalent of a Superman cameo or a Batman cameo? Wolverine’s Batman, right?).